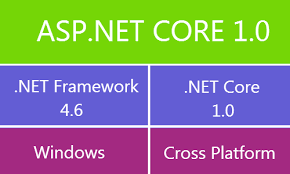 Ever since the first version of ASP.NET 1.0 got launched, it has given reasonably good time to the developers. Numerous developers have successfully been using it to develop and run web applications for over fourteen years. Since, the framework of ASP.NET 1.0 has gone through a lot of changes, many capabilities have been added with the latest version ASP.NET Core 1.0.

Originally launched as ASP.NET vNext, it was twice renamed as ASP.NET5 and ASP.NET Core 1.0 respectively, as it’s core concept was latest and it wasn’t exactly designed as the replacement of ASP.NET 4.6. With this release, it has become a leaner, modular, cloud optimized, cross-platform and comparatively smaller framework that works most smoothly with every ASP.NET development.

What improvements does it offer?

Microsoft has gone to great lengths by investing heavily on ASP.NET Core 1.0 and introducing new IDE to make it cross platform portable. Being an open source and cross-platform framework with alternative to Core CLR-Mono; it allows developers to develop and run applications on Mono as well as Core CLR, without caring for computer’s operating system. Take an overview of following advantages offered by ASP.NET’s latest version.

It allows you to build and run cross-platform ASP.NET applications on Linux, Windows and Mac.

With all probability lacking issues resolved by Microsoft; non-windows users can use the web application development functionality.

Ability to self-host or host on IIS.

ASP.NET 4.6 was called off, being a great disappointment for the developers due to their inability to try out technical innovations. Since no innovations were available for developers on the Windows platform; developers were unable to keep up with continuously evolving technology. On the other hand, due to the lack of knowledge about the innovations that many other open-source frameworks provided; they faced similar issues. Likewise, there were some other issues that went on to make the ASP.NET community smaller day-by-day and ASP.NET Core 1.0 has become the game changer; which is also visible due to the following reasons.

Compatible to develop with languages such as C#, F#, etc.

With latest version’s latest working capacities, you can now perform the tasks that were more like abandoned prior to the launch of ASP.NET Core 1.0. In order to meet diverse types of business and technology demands of our customers; we, at inoday have proven our worth at international platform. Our experts have successfully delivered range of solutions that can be classified under POS (Point of Sale), eCommerce to DMS (Document Management System) and other sections.

Business Central Essential vs. Premium: A Choice to be made Diligently
October 7, 2021

Top Financial Services Trends in NetSuite for Your Business to Scale and Grow
September 29, 2021
View Case Studies
Request for Quote

Netsuite Integration updates
Go to Top
THIS SITE USES COOKIES TO PROVIDE YOU WITH A MORE RESPONSIVE AND PERSONALIZED SERVICE. BY USING THIS SITE YOU AGREE TO INODAY’S USE OF COOKIES. PLEASE READ THE COOKIE NOTICE FOR MORE INFORMATION ON THE COOKIES WE USE AND HOW TO DELETE OR BLOCK THEM.
Accept All
Manage consent

This website uses cookies to improve your experience while you navigate through the website. Out of these, the cookies that are categorized as necessary are stored on your browser as they are essential for the working of basic functionalities of the website. We also use third-party cookies that help us analyze and understand how you use this website. These cookies will be stored in your browser only with your consent. You also have the option to opt-out of these cookies. But opting out of some of these cookies may affect your browsing experience.
Necessary Always Enabled
Necessary cookies are absolutely essential for the website to function properly. These cookies ensure basic functionalities and security features of the website, anonymously.
Functional
Functional cookies help to perform certain functionalities like sharing the content of the website on social media platforms, collect feedbacks, and other third-party features.
Performance
Performance cookies are used to understand and analyze the key performance indexes of the website which helps in delivering a better user experience for the visitors.
Analytics
Analytical cookies are used to understand how visitors interact with the website. These cookies help provide information on metrics the number of visitors, bounce rate, traffic source, etc.
Advertisement
Advertisement cookies are used to provide visitors with relevant ads and marketing campaigns. These cookies track visitors across websites and collect information to provide customized ads.
Others
Other uncategorized cookies are those that are being analyzed and have not been classified into a category as yet.
SAVE & ACCEPT